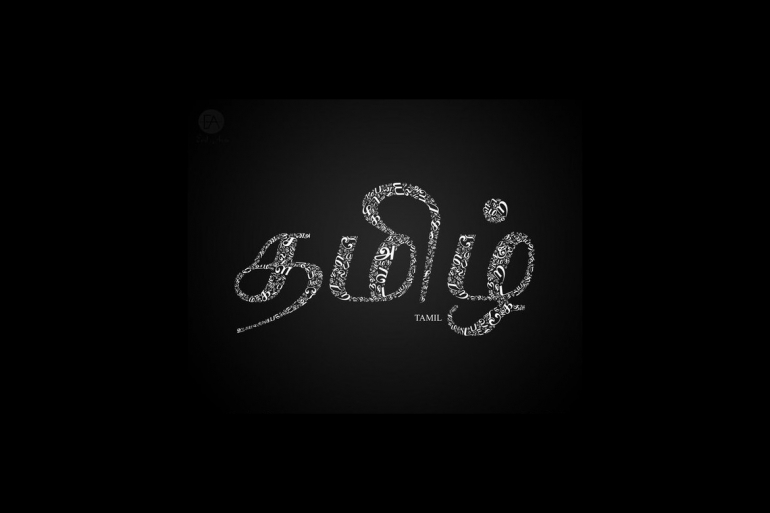 Hope you guys have enjoyed the past few days with the AMAZING sun...and is enjoying the little darker weather as well....... !! I sure did...... The first couple of days in the week was just waaaaaaay too hot, to go outside, so I kind of enjoyed the overlapping skies... I am going back to Denmark next week to visit my family, and wanted to go to Köln for some gift shopping...... But the weather was just way too hot.... So I actually postponed it every day, and then finally decided, I wanted to go yesterday .... Just when I was done getting ready. It starts to pour down..... And it was heavy..... And lasted for a few hours...... So today I am definitely going giftshopping no matter how the weather is.... !!

Anyways...... Today's topic is actually something I care about..... The Tamil language.......so to begin with, I wanna explain my relation to Tamil. I came to Denmark when I was only 6 months old, and have been brought up in the country. I am not sure this is only for Denmark Tamils, but they tend to integrate more with the white people, than I have seen in any other countries. I think the reason why is that in school, and kindergarten, only a few other Tamil people would be around, so we were more likely forced to be with the white once. The other thing is that most of the cities, did not have that many Tamil families in the town. We lived in a town with approximately 50-60 families. Even though we had the others family, I think most of us, in our city, spent more time with white people than Tamil people. Anyways, in our home our language was Tamil. We spoke Tamil with my parents, and among us siblings, we spoke Danish. It's still the case today ..... My dad is the oldest of 7 kids, and his youngest brother is only 5 years older than my older brother. My uncle lived with us ever since we came to Denmark, and only moved out when he got married...... He was like a big brother to all of us, or a little dad..... We call him kuddiappa.....In fact everybody calls him that :) (I think it came from kuddi sithappa)....... Anyways, since the age gap was the same for him, my older brother, me and my younger brother, he was one of us. So we even spoke Danish together. Normally we would speak Danish with him, and he would reply in Tamil. My younger brother does the same with my older brothers kids. He only speaks Tamil with them, and they would reply in either English or Danish :)

I am not sure why, but wherever I go, people always gets so surprised by our Tamil. Like they can't believe that we speak this well..... In the beginning I didn't understand why they said that...... But with the time, and after visiting canada, I realized, "yea ok, we are actually pretty good compared to many others". Even in our city we had kids who couldn't say one single word in Tamil...... I guess it's all about how much you use the language at home......how much you "force" the kids to speak Tamil when they are home......

Anyway, the language for me is important.... Not only because it's great to have a language no one understands, when you really need to say something In a crowd, and maybe others don't need to hear it .... Hahaha :) anyways jokes aside..... For me it has been important to be fluent in my "mother tongue" in order to communicate with the older generation, in order to be able to communicate across countries..... In order to not forget where we actually come from....... The reason why me and my partner even ended up together, was the language. He comes from Germany, I from Denmark, but the Tamil language, made us able to communicate with each other...... English would have been awkward for us...... We text in English......and still do, but when we talk, we talk Tamil (and a bit german now, because I need to learn to speak the language) There is still one thing I am pretty embarrassed about.... I used to write and read Tamil almost fluently...... I haven't used it for the last 10-15 years, which means I have difficulties reading and specially writing........ So maintaining guys.... It's important...... !!!

I have watched some different documentaries about the Tamil language which are quite interesting. They are all available on YouTube, so easy to find. Another really interesting youtuber I found was Soniya.TV - she is Canadian, and works as a real estater. She has this amazing channel where she posts about whatever she finds interesting ..... One of her topics is the Tamil language which is quite interesting. So please go have a look at her channel. Another interesting person, which is featured a lot on YouTube is Jonathan Ripley, who is a Tamil Preceptor at Harward University. Listening him speaking Tamil is great :) I just love when white people speak Tamil .... :)

Some people do not speak properly Tamil, or they speak with an accent, but I think the most important is that, even though it's not perfect..... Just try..... I think people will have more respect for people trying to speak Tamil, than for those who don't even try.....

That's all from me this week..... Hope you all will enjoy ur weekends in the great weather, that we are promised :)