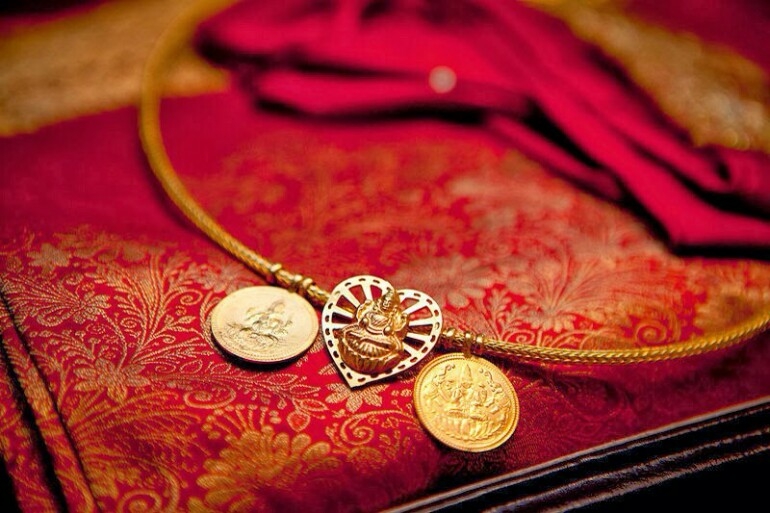 Oh my Lord, i have a lot of excuses :( First of all, so sorry for the very late post....... Second of all sorry for the English post...... As you all know, we are two bloggers now..... The amazing Arlene and myself...... We write the post biweekly, and this week was my turn.... I have been super busy with some stuff, traveling and lack of sleep...... It all ended up with me being sick and yea..... I haven't been myself lately, which is the reason why I haven't been able to write before now.... Sorry !!

Now the topic for this week is a little part 2 of the post from last week....... So Arlene wrote about the wedding ring and the meaning behind that, Arlene is a Christian girl, so I thought I could write about the Thaali ..... The Mangala Sutra as it's also called in Sanskrit. Mangala means holy or auspicious and sutra means thread. Normally the thali is a Hindu thing, where the groom ties it around the brides neck at the wedding. The ritual is the indication for a Hindu wedding, and it means that now the couple is married.

The original and traditional thali is a thread prepared with turmeric (manjal thool). Nowadays people make the thali is gold, and typically we Tamil people makes a thali the size of the brides age. So if the bride is 21 years old, the thali is 21 pavin. We Tamil people will usually do the "ponn urukkal", which means that the gold from the thali will me melted and the jeweler will then create the thali. The brides family and grooms family will be present at the ponn urukkal. As soon as the ceremony is over, the bride and groom are not allowed to see each other before the wedding day. At the wedding day, the thali will be sent around the hall, to get blessings from everyone attending, and only after that, the brides goes in to change into her Kurai, and thereafter the groom will tie the knot.

The 3 knots symbolize Brahma, Vishnu and Rudhra. The 3 knots symbolize 3 different aspects of a married woman. The first knot represent her obedience to her husband, the second to his parents and the third represent her respect to God. They also say that the three knots represent that 1. The father protect her childhood, 2. The husband protect her youth and 3. The sons protect her in old age. A woman can never be unprotected. In the internet there is so many other reasons for the 3 knots as well, but there is no "right" or "wrong" here. Most often the groom ties the first knot and then his sister (the tholi) ties the remaining 2 knots. When a woman wears the manjal thali, or gold thali, it indicates the woman is now married. The woman wearing the thali does also mean that the husband will be healthy and a good well-being. The thali is always bought by the grooms family {adselite}

The thali has different names and different colors according to the state in india. Our typical Tamil thali is a gold Pillayar thali, if the bride and groom have checked the kurippu or the wedding is arranged. And Amman thali if it is a love marriage and therefor the families decides not to check the kurippu. It often follows with 2 gold coins on each side of the thali.

They say that the thali will regulize the womans blood circulation. They say it will have the ability to control the level of pressure in a woman's body. This is why they say the the woman has to wear the thali all the time, by touching the body.

Nowadays our Tamil people wear very heavy gold thali, and therefore they put the thali in the bank of together with all their other gold. Most often they only use it at functions and stuff, and now they don't even use the real thali, but a imitation look alike in stead.

I know several couple who do not even have a thali anymore, and only change rings. although the thali actually has a nice meaning and symbolic.